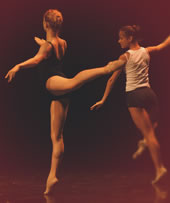 Presentation of the department

The creation of the Dance Department of the Lyon CNSMD was largely due to the initiative of Igor Eisner, whose analysis and determination to bring the project to fruition were determining factors, and to the preparatory study by Léone Mail. It was Igor Eisner who first understood the necessity of giving high level dance teaching full institutional recognition.

The move had been prefigured, a few years earlier, by the more open course content that accompanied the creation of the Lyon CNSMD, with the arrival of subsidiary subjects, heralding a new era in music teaching in higher education. Thus the Lyon CNSMD had become the ideal place for the creation of the first dance department, which saw the light in 1985. The department flourished quickly under the impetus of its first director, Didier Deschamps, and moved to its new premises on the third floor of the Grenier de l’Abondance in 1992, only a few yards away from the Music Department.

When Philippe Cohen arrived in Lyon in September 1990 to take over as director, the department was in the happy position of being about to transfer to a wonderful new work environment.

Since those early days the department has never lost sight of the inspiration given at the outset by Igor Eisner and Didier Deschamps, namely the desire to progress incessantly, never taking anything for granted, the constant readiness to call anything and everything into question if it is relevant to the needs of teaching the art of choreography.

It takes teamwork to face up to a challenge of this sort. Every individual member of staff since 1985 has made a contribution to the successful development of the department, as have the teaching and administrative staff of the Lyon CNSMD as a whole. Thanks to the means put at its disposal, the dance department has grown very quickly.

The dance department is housed in separate premises very close to the remainder of the CNSMD, known as the « Le Grenier d’Abondance » (Granary of Plenty). This building, which was built in the first half of the 18th century, is listed in the Supplementary Inventory of Historical Buildings and also occupied by the Regional Office of Cultural Affairs. 15000 sq. ft. of space on the top floor are given over to dance teaching.

The premises are comprised of:

The National Conservatory of Music and Dance of Lyon offers a professional training residency in string quartet allowing to deepen its practice and to perform for a year, in collaboration with the Opéra de Lyon and cellist Vincent Ségal for the 2021-2022 season.

Stage | give your future a boost

The selected quartet will be associated with several concerts produced by the CNSMD de Lyon and the Opéra de Lyon, as a quartet or with Opera Underground guest artists of the season.
Along with various professional partnerships (Belle Saison, Pro Quartet, etc.)

Deadline for submitting applications : send your quartet CV and the copy of the highest diploma of each member of the Quartet on concours.cnsmd-lyon.fr/

Start of residency in Lyon, France

Admission fees (for information purposes only)

Certain concerts may be subject to pay. This training is qualifying but not leading to qualification. It could be if the quartet or one of its members wishes to enroll in a longer course within the CNSMD (after a competitive entrance examination).