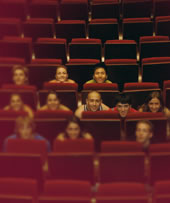 The Department of Musical Culture, the newest of the departments at the Lyon CNSMD, offers students a complete course at undergraduate, master’s and doctorate levels. The teaching at undergraduate and master’s levels is based on eight different subjects : applied analysis, analysis of 20th and 21st century music, ars musica, art and civilisation, science of new techniques, ethnomusicology and history of music.

In addition, undergraduate students have to do a lot of personal work, which makes them aware of the many facets of work in the field of musical culture. The attention at master’s and doctorate levels is focused on research.

The teaching is supplemented by seminars and master-classes given by well-known figures from the world of music.

Art and civilisation / History of the Music (Master)