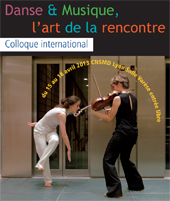 The international colloquium on the theme of “Dance and Music : the Art of the encounter” which was held on 16 – 18 April 2013 is the second event of its kind organised by the Lyon CNSMD.
The three-day colloquium was devoted to the problems encountered when dance and music meet, sometimes on film, and examined under many different angles. When can one of these art forms be said to take precedence over the other ? Can they ever be combined into one ? Is ‘independence’ the key word ? The colloquium attempted to answer these questions by taking a new look at the relationship between music and dance, using examples that have marked the different periods from the Renaissance to today.

The days were puntuated by performances of music, notably music for film, and dance (in grey in the program).

There have always been many meeting points between dance and music, which have taken on many different forms and senses and have often been symptomatic of the evolution of the thought and the sense of culture and ideas in a given society. Examples of this are the relations between dancing masters and composers during the 16th and 17th centuries, the emergence of the opéra-ballet and the stylisation of dance forms, via the recollection of their rhythmic formats, which characterised the instrumental suites of the 17th and 18th centuries. More recently, there have been the famous relationships between choreographers and composers such as that of Balanchine and Stravinsky, or associations such as those of John Cage and Merce Cunningham and of Thom Willems and William Forsythe. From the end of the 19th century onwards and throughout the 20th century the number of encounters of this type has constantly increased.

From the beginnings of the cinematograph the early film-makers showed a passionate interest in dance movement, as can be seen in the first films of Edison and the Lumière brothers. Hollywood very soon took over the stage musical and made it into a new form of cinema in its own right. Similarly numerous operas have been the subjects of cinema productions. Dance and music are woven together in many different ways in films devoted neither to dance nor to music. Finally, after several decades, films of dance have been elevated to the rank of works of art and composers frequently include projected images in their stage works.

Sketch for a theory of the relations between dance and music in multi- and inter-media practice.
David Revill, University of Maryland (USA).

Sacrifice and silence in the works of Luigi Nono and Andreï Tarkovski.
Charlotte Ginot-Slacik, Lyon CNSMD, doctorand at the University of Rouen.

Musicians who dance by the Department of Early Music of the CNSMD. Music prepared by Martial Morand. Programme of French dances from the 15th to the 17th century. Works by D’Eustache du Caurroy, De La Barre, Pascal Collasse and Jean-Philippe Rameau.

Concerning some articles devoted to dance in the Encyclopédie by Diderot and d’Alembert.
Alban Ramaut, Jean Monnet University, Saint-Étienne.

Music and dance from the end of the Middle Ages to the Renaissance : the transition from ‘music to which people dance’ to ‘music for dancing’.
Welleda Muller, Paris-Sorbonne University.

Algorithmic and aesthetic inter-relations in the dance piece Stocos.
Pablo Palacio, Zurich University of the Arts.

An example of cosmic dance in the contemporary choreographic landscape : the dancing body and the body of sound in the work of Anne-Teresa de Keersmaeker.
Sarah Di Bella, Paris West University Nanterre – La Défense.

Le Marteau sans maître (The Hammer without a Master), or how Béjart discovers Artaud in the music of Boulez.
Antony Desvaux, doctorand at Paris 8 University.

Composition by Hugo Gonzalez for the film « The Love of Zero » (Robert Florey, 1927), CNSMD instrumental ensemble.

The ballet music of Nikos Skalkottas seen as a representation of aesthetic issues in Greece between 1930 and 1940.
Lorenda Ramou, doctorand at the Paris CNSMD and at Paris-Sorbonne University (Paris IV).

The sociological ingredients of musical alchemy. The articulation of dance and music in the creative process for the revival of the ballet La Source at the Paris Opera.
Laura Cappelle, doctorand at Paris 3 Sorbonne Nouvelle University.

Ballet in opera : the example of Don Giovanni by Mozart and Da Ponte at the Académie de Musique (1805 and 1834).
Séverine Féron, University of Burgundy.

What the cinema does to dance: performances of kabuki in Japanese silent films and the first talkies.
Simon Daniellou, Rennes 2 University.

Writing for gesture and movement in the works of Karlheinz Stockhausen in the seventies and eighties (Inori, Harlekin, Kathinkas Gesang).
Emmanuel Ducreux, Lyon CNSMD & Paris CNSMD.

The papers of this international colloquium were presented in French or in English and interpreters translated the presentations in other languages.