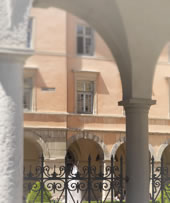 The Lyon CNSMD in a few figures...

APLLICATIONS FOR ADMISSION IN 2014

The number of applications for admission received was 1016 all told.
Of these, 186 candidates were admitted.

There are 44 main subjects taught, to which admission is by audition, 70 subsidiary subjects, and a « Laboratoire Scène/recherchE ».

The teaching staff, made up of 188 people, is divided into three categories: teachers, assistants and accompanists.

62 master-class and seminaries have taken place in the institution.

There are 67 administrative staff.

The public season consists of about 350 events per year, 40% of which take place outside the conservatory.
Admission to most events is free.

The Lyon CNSMD enjoys the support of more than fifty partners for the season of public events.

1977
Discussions are held with a view to setting up a second French   national conservatory, in Lyon.

18th February 1980
Official creation of the Lyon CNSMD with Pierre Cochereau as director in the rue de l’Angile, fifth district of Lyon

1983
Launch of plans for the rehabilitation of the former veterinary school at 3 quai Chauveau in the ninth district of Lyon and construction of a new building by architects from Espace Construit.

6th Mars 1984
Death of Pierre Cochereau and nomination of Gilbert Amy. Opening of the dance department.

28th November 1985
First stone of the new conservatory is laid by Jack Lang, Minister of Culture and Communication.

5th June 1993
Inauguration of the new premises of the Dance Department in the Grenier de l’Abondance.

1st September 2000
Nomination of Henry Fourès as Director of the CNSMD.

2011
Finalisation of the new Bologna Process course structure with the opening of a doctorate programme in Research and Practice in partnership with the 3LA doctoral school.